The original plan according to Shin, the bass player, was to play as fast as possible. They attempted to give the impression of playing fast without actually playing fast. The first Gauze recordings are the tracks from the City Rocker compilation LP with features other New Wave bands and Gauze doing 10 songs. They covered Discharge’s "No TV Sketch", but the song title is "Anti-Machine". They released 1984's Fuckheads LP on ADK Records. 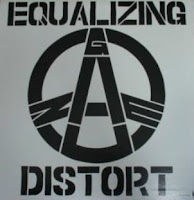 Equalizing Distort was released in 1986. They released the Genkai Wa Doko Da (“What’s the Limit?”) LP in 1989, and in 1991 they played a 10th anniversary gig, where they played three sets covering the 3 periods they had gone through in the last 10 years. They played 51 songs over these 3 sets. In 1996, they began a US tour, though it lasted just three shows - a fourth was scheduled, but was cancelled. They played at Gilman St. in Berkeley, at the Bomb Shelter in Minneapolis and in Chicago at the Fireside Bowl. They also recorded songs for a 7” that came out on Prank a little after this, while they were in SF.
Their 12” Kao O Aratte Denaoshite Koi was released in 1997 (translated as “Go wash your face and come back” - a Japanese expression used after someone is physically beaten by someone else).
Gauze is a long-running and (relatively) prolific group. They’ve released five albums through 2007, though it should be noted that these "albums" never run more than twenty minutes in length.
When I was first getting into hardcore, Gauze was the only Japanese band that anyone knew about. Hilariously, almost every Japanese record reviewed in Maximum Rocknroll would be compared to Gauze, however crazily dissimilar they sounded.
In fact, Gauze is a terrible frame of reference, because they don’t really sound like anyone else. The only comparable group is maybe Infest, not so much because they sound identical, but the frantic pacing and outlandish vocals share a "sensibility," as they say. Almost all other fast, decidedly unmelodic hardcore runs together, but these two bands are crisp without being over-technical, catchy without sacrificing speed, and aggressively raging without any trace of metal attitude. 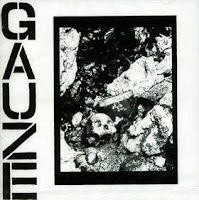 Gauze isn’t an ideal "gateway" band into Japanese punk. One could trace the various members and side-projects of Death Side, in much the same way that a jazz novice can move outward from Miles Davis' sidemen—but Gauze’s is a closed universe. Their influences are obscure to me, even now, and their aesthetic, while baffling, is less over-the-top than, say, G.I.S.M.'s., who once threw an x-ray of a blowjob on an album cover.
Gauze was well known for reasons that made a lot of sense before the internet. Not because they were accessible, musically, but because they had a record on an American label, Prank Records. In 1996, Gauze "toured" the US, playing a handful of shows in far-apart cities, and recorded a six-song EP while on our beauteous shores.
Even in Japan, where their live sets are essentially "workshops" for new material, Gauze plays rarely. For their 25th anniversary show, they recreated each album meticulously, switching to antiquated instruments and equipment in order to perfectly recreate a sound. This is cutesy when the Cure does it, but strangely moving when Gauze (only slightly younger than the Cure) blast through 50 songs in a single night. 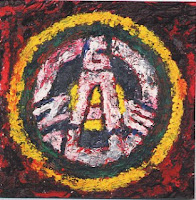 Gauze's idea of hardcore is not sophisticated. It is a blunt instrument. There are no guitar solos, no frills: simply high-speed, tuneless ranting. Unlike much Japanese hardcore, it is not "big." Gauze blows you away, not with 200 Marshall stacks and a fuck ton of dry ice, but through expertly honed riffs and pneumatic precision. The simple goal appears not to be so much to entertain the audience as to outlast and overload them. In the great tradition of punk's antagonism towards its audience, this may be the most subtle and cruel approach of all.

I've been a big fan of Wikipedia since it's launch in 2001. I've spent many hours scrolling through it's pages, hopping from link to link, surfing as they say, starting at one random point and oftentimes ending up somewhere completely different.
The bulk of the time I've burrowed through Wikipedia's pages I've been looking at either music related material, or historical events. Of course, as with everything else on the internet you have to take what you read with a pinch, further research is compulsory if wanting to get a more rounded truth on the matter, Wikipedia is actually banned as source material at my college. But still, it's always been a good place to start for quick, easy information, if not always one hundred percent acurate.
Wikipedia's most charming charactertic for me was just that however, the fact that it was for everyone, by everyone, just like my beloved punk rock. Anyone could add to the ever growing online encyclopedia, I myself wrote biographies for some of my old bands and published them there. But alas, that seems to have changed...
A while back I thought it would be fun to publish a page for one of my current bands but to my horror, was basically told that we weren't commerical/succesful/big/co-ol enough. I get that maybe the site is now so big that they're trying to stay away from users blatantly using it as a place to plug products, but still, the criteria for publishing a page about a band was nothing short of shocking. You had to be on a major label or have at least two records released on one of the "respected indie labels", whatever the fuck they are?! And that was just the tip of it. A list of other demands I can't be arsed listing all of a sudden stood in my way.
So with that, I thought I would create a new little pocket of the world wide web dedicated to gathering information about bands and artists from the underground. The main driving force behind the idea is the unashamed trainspotter/geek in me, and if it's only ever myself that uses it then it will still afford me hours of amusement, much akin to the rather huge spreadsheet-formatted catalogue of my record collection that I built over the space of a couple of years.
The idea is simple; to create my own version of Wikipedia dedicated to underground music. WikiPunk. Punk being that most of the information I will be adding will be the very genre of music I've been involved in personally for the last twenty years, but all artists, labels, zines that are "doing it themselves" are welcome to add a page. "Respected indie labels" indeed? What fucking use is that to me or anyone else who cares? If there's a band in Amsterdam, or Syracuse, or Wellington that has just released their first tape and played only a handful of shows, I'd still like the chance to stumble across them and find out their story. Of course, a lot of artists use bandcamp and other social media sites to spread their word but that's all very individual, my idea here is to create and inclusive encyclopedia.
In the shards of spare time I have I will copy and paste biographies of artists from where I find them, using oficial information if it exists. On top of that I'll add a couple of images if available, as well as a discography/members section. I welcome absolutely anyone to contribute by simply sending me their story, simply mail me via the contact form below and I'll get back to you, and if nobody does then I'll just build it up slowly over time, purely for my own amusement.
/G