Kaaos was a hardcore punk band from Tampere, Finland. Formed in March 1980, they were one of the first hardcore punk bands in Finland to release a record (the first being Rattus, at a time an ordinary -77 style punk band), and though their lineup has changed frequently through the years, the band is somewhat active thorugh the years. Only the band's guitarist Jakke (who later became the vocalist) remained as the original member and grew to become the center figure of Kaaos.
Jakke died on 29 November 2007. He apparently died of alcohol-related causes at the age of 42.
Kaaos has been described as having "the trademark Finnish 80s sound, fast buzzsaw thrash riffs, reverby vocals, all over the place drumming, and plodding bass."Their music defined what HC punk means for Finns and their EP "Totaalinen Kaaos" released on Propaganda Records became one of the bestselling Finnish EP records ever. Two years later the band released the LP "Ristiinnaulittu Kaaos" on Barabbas Records that was also quite successful.
While their early songs became known to be focused on the local authorities (the police) they always criticized not only the government, but also how different beliefs and religions are used to justify war and the suffering war causes. They also sang about day to day violence they had to meet on the street as punks in their day and many other personal topics, yet keeping true to the anarcho punk view.'
Jakke started out as a guitar player in a band called Porttikielto according to his own words back in 1978. They played a gig or two at the early Tampere punk club called "Safety pins", which was the place where more better known and legendary Tampere punk
bands like Eppu Normaali,  Sensuuri and Karanteeni started from. According to him "we would laugh at the hippies who tried to `get with it` and we would keep the teddy boys away just by our numbers. No problem"

Later on "older" punks from the band Nivelreuma asked him to join a new band called Amiraali Nelson, named after Admiral Nelson and the brand of beer named after him which was popular at the time. This band went on to record one song on a compilation album called Kolme vuotta myöhemmin ("Three years later") in 1980.
In early 1980 Jakke "threw out some of the older people" and renamed the band Kaaos ("Chaos"). The shift was to make sure that no new wave type of influences or people in the band would be allowed. Although Crass was already an influence, hardcore as such was not so at that point. However, the band started to play faster and more chaotic and adopted the studded leather jacket, spikey haired and mohawked image many would emulate later on quite quickly. At this time, this was unheard of even in the Finnish punk scene which was in the midst of evolving from "punk" into new wave into corporate "Finnish rock". This harsher sound and look was just not something anybody expected or wanted.
In the fall of 1981 the group recorded a split ep with Cadgers (who later evolved into Riistetyt. Their side of the ep, though re-presses might omit the name, is called "Kytät on natsisikoja" ("Cops are nazi pigs") featuring song of the same name, which has been a Finnish hardcore classic and a definitive song of the genre ever since. However, Jakke who is considered the legendary vocalist of the band does not sing on the song or on the recording. He will, hower, play the guitar. 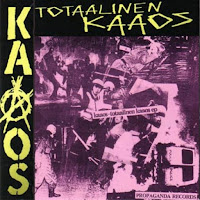 After many line up changes, which were to follow the band until the end, Kaaos released "Totaalinen Kaaos"-ep which is, by many considered to be their finest release and which is in Finnish punk culture one of the most definitive records of the "82-hardcore" style of Finnish hardcore, named after the year this and some other classical Finnish hardcore punk records came out, all released by local independent labels. At this point, Kaaos also became to be known outside Finland mostly because of tape trading and for the fact that their releases were sold and traded abroad. However this did not help them back home. Gigs were scarce and their next release Valtio tuhoaa, ei rakenna ("Government destroys, not builds") was not released until the nineties.
In 1984 the band released their only real full-length album, Ristiinnaulittu Kaaos ("The crucified Chaos.") and a split lp with Terveet Kädet, although Terveet Kädet later made a point about never wanting to play in Tampere because bands like Kaaos rejected their too "humorous" lyrics, preferring to sing more about topics related to anarchism. Since Terveet Kädet has played in Tampere later on, this feud might have been settled.
They also recorded their "last" ep, Nukke. ("The Doll") Which was released eight years later. At this point the sound of the band had perhaps evolved to a point that Jakke and the bass player Nappi formed the band Kuolleet Kukat which had a style more in the vein of Amebix and post punk. They released one ep and recorded one ep more, before also disbanding. Then re-surfacing in the nineties to record new material, then dispanding again. In the late nineties and early 2000 Jakke and Nappi also had a band called Positive/Negative which played more straight forward, crust influenced anarcho punk.
In November 1999, Kaaos played a show in Lepakko, the former squat in Helsinki where they and many other legendary early hardcore had shared the stage in the early eighties. The gig was the very last gig before the building was demolished to make wave for an office building for Nokia. Even though the band shared the stage with such contemporaries as Riistetyt, Appendix and Terveet Kädet, the "original line up" did not manage to play well and was considered a "novelty act" at best and a "disgrace" by those who saw them. Despite all this, the gig was a starting point of a revival of many old school Finnish hardcore bands, even to many who did not play there that night. 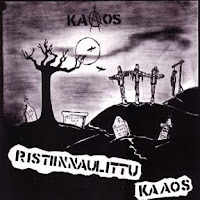 Kaaos came up with a new line up that after doing a split ep with Svart Agression and some compilation tracks, put out the mini-lp Ismit ("isms"), which was a very mature release, delivering the Kaaos sound but not trying to update much to the "crustie" style they missed out on themselves but also helped to influence.
After playing and touring, this incarnation of Kaaos also deteriorated. The last gig Kaaos ever had was at the release party of the book "Parasta lapsille" in October 2007 in Tavastia. This was again with the "original line up" that was not allowed to rehearse, so what was heard was mostly embarrassing. In the end of the show, Jakke also gave a long speech nobody could hear since he did not seem to realize the microphone was cut off. He died in his sleep a little over a month later.
Source: Wikipedia
Kaaos Discography
Posted by Besatt at 6:40 AM

Email ThisBlogThis!Share to TwitterShare to FacebookShare to Pinterest
Labels: Kaaos

I've been a big fan of Wikipedia since it's launch in 2001. I've spent many hours scrolling through it's pages, hopping from link to link, surfing as they say, starting at one random point and oftentimes ending up somewhere completely different.
The bulk of the time I've burrowed through Wikipedia's pages I've been looking at either music related material, or historical events. Of course, as with everything else on the internet you have to take what you read with a pinch, further research is compulsory if wanting to get a more rounded truth on the matter, Wikipedia is actually banned as source material at my college. But still, it's always been a good place to start for quick, easy information, if not always one hundred percent acurate.
Wikipedia's most charming charactertic for me was just that however, the fact that it was for everyone, by everyone, just like my beloved punk rock. Anyone could add to the ever growing online encyclopedia, I myself wrote biographies for some of my old bands and published them there. But alas, that seems to have changed...
A while back I thought it would be fun to publish a page for one of my current bands but to my horror, was basically told that we weren't commerical/succesful/big/co-ol enough. I get that maybe the site is now so big that they're trying to stay away from users blatantly using it as a place to plug products, but still, the criteria for publishing a page about a band was nothing short of shocking. You had to be on a major label or have at least two records released on one of the "respected indie labels", whatever the fuck they are?! And that was just the tip of it. A list of other demands I can't be arsed listing all of a sudden stood in my way.
So with that, I thought I would create a new little pocket of the world wide web dedicated to gathering information about bands and artists from the underground. The main driving force behind the idea is the unashamed trainspotter/geek in me, and if it's only ever myself that uses it then it will still afford me hours of amusement, much akin to the rather huge spreadsheet-formatted catalogue of my record collection that I built over the space of a couple of years.
The idea is simple; to create my own version of Wikipedia dedicated to underground music. WikiPunk. Punk being that most of the information I will be adding will be the very genre of music I've been involved in personally for the last twenty years, but all artists, labels, zines that are "doing it themselves" are welcome to add a page. "Respected indie labels" indeed? What fucking use is that to me or anyone else who cares? If there's a band in Amsterdam, or Syracuse, or Wellington that has just released their first tape and played only a handful of shows, I'd still like the chance to stumble across them and find out their story. Of course, a lot of artists use bandcamp and other social media sites to spread their word but that's all very individual, my idea here is to create and inclusive encyclopedia.
In the shards of spare time I have I will copy and paste biographies of artists from where I find them, using oficial information if it exists. On top of that I'll add a couple of images if available, as well as a discography/members section. I welcome absolutely anyone to contribute by simply sending me their story, simply mail me via the contact form below and I'll get back to you, and if nobody does then I'll just build it up slowly over time, purely for my own amusement.
/G